BETA - this website is a new design we are testing. You can find the main website here: https://www.girlsnotbrides.org

This study looks at the causes and impacts of child marriage among Syrian communities living either in or outside refugee camps in Lebanon.
Download resource 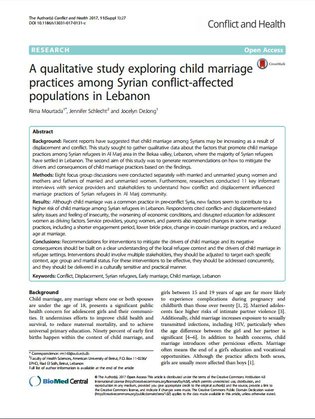 This qualitative study explores child marriage practices among Syrian communities who have been living in Lebanon for one to three years, either in or outside refugee camps.

The study is useful to better understand the local context in the Al Marj and Bekaa regions in Lebanon, which is essential to better address child marriage.

Like in other studies about child marriage among refugee communities, the researchers found that families facing increased poverty, insecurity and a lack of access to education, turned to child marriage to cope with this difficult situation.